You are here: Home1 / Zombicide Compendium #1

Zombicide’s Compendium #1 is a 92-page book entirely devoted to your favorite game! Inside, you’ll find updated versions of all the official Campaigns and Missions published for Season 1, as well as brand new Missions, a precious Designer’s Note, and an exclusive Campaign!

Are you a perfect zombie killer looking for new challenges? Do you know someone fitting this description? Then Compendium #1 is the perfect gift for you and your friends! 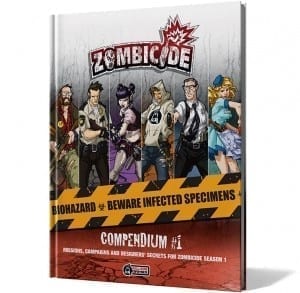 September 2012 to the early days of October 2013. In roughly one year, Guillotine Games published many Missions and contents for Zombicide, its first game, soon to be known as Zombicide Season 1. And you were part of it through the “Kyoko contest”, allowing us to gather hundreds of Missions. First of all…thanks a lot!

All Missions featured in this compendium are designed with Zombicide: Season 1. Feel free to add anything you want…at your own risk!

The Compendium #1 gathers all official Zombicide Missions published in this timeline. They were edited to fit our current standards and layouted to create a real, complete book. Let’s have a tour!

Missions labeled with an “A” were created by Guillotine Games’ team. Others were published in magazines. Many among you will discover them along these pages.

Missions labeled with a “C” were created by you, the players, for the Kyoko mission contest. The most immersive, original, surprising or just plain fun were selected by Guillotine Games’ team and published on the official website. If you intend to design your own Zombicide missions, you should carefully study these ones first. They really sport interesting and unexpected features.

Winners received Kyoko, a rare survivor, in both her standard and zombivor versions. This is why we chose her as a mascot for this book.

The Switch City campaign was released as a reward for the backers of the initial Zombicide Kickstarter campaign. Simply put, the “real thing” began with the first Kickstarter, and Switch City is a precious part of its legacy.

The Boomtown campaign was specially created for this compendium. After a year of battle, Season 1’s Survivors face a formidable invasion and decide to finish the job once and for all: by blasting an entire city. Every plan, however, never goes exactly as planned. Are you in?

The Designers’ Note on game cards used to be the most popular of its kind for a good reason: it reveals a few secrets to tweak the game difficulty to suit your needs, using the numbered Zombie cards and numerous Equipment cards. It’s an absolute must-have if you intend to customize your Season 1 games and multiply tenfolds the already great replayability of Zombicide.

Would you like to play the exclusive Boomtown campaign? You’ll have to defeat seven challenging missions if you want to survive the Apocalypse and reach Zombicide Season 2: Prison Outbreak ?

Boomtown is a 7-Missions campaign for Zombicide Season 1. Players gather their favorite Survivors in an elite team and go for a task never heard of in the Zombicide universe: nuking a zombie town with every mean available. Make sure to select the best Survivors for this task, and watch out for each other: surviving through seven chained Missions is a challenge. After winning the Boomtown campaign, you’ll know what it really takes to be a seasoned Survivor in Zombicide.

Beaumont used to be a nice city whose main activity was a huge game factory. Half the town, if not more, used to work there, and they often called for backups in nearby suburbs for the Christmas shipping. The whole Beaumont was throbbing with the pulse of its twin tidal waves: the first in the morning, when employees checked in, and then in the evening, when they came back home. The city attracted lots of people and thus was very crowded.

Now, this happy workforce has turned into a zombie legion. This is a real problem, because Beaumont’s zombies kept their “tidal wave” habit, but for hunting. When a pack of them encounters resistance, you can be sure the swarm moves for the kill in the next hours. They already attacked us several times in nearby towns and now represent a serious threat to our turf.

After a hot debate, we decided Beaumont would take too much effort to redeem, and had to be erased from the surface of Earth. We’ll collect every flammable substance in the nearby towns, each and every available explosive device, and turn Beaumont into…Boomtown.